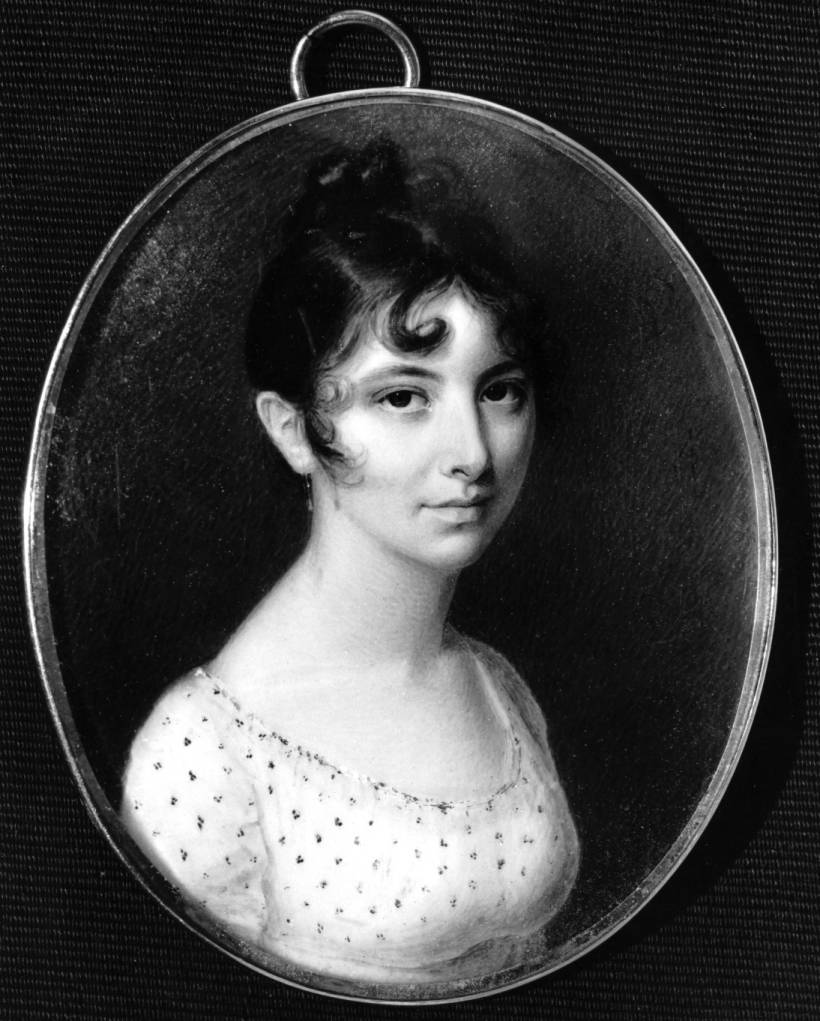 The first Hebrew Sunday school organized in America was formed in Philadelphia in 1838, under the tutelage of Jewish philanthropist, Rebecca Gratz, and spearheaded by a group of women (including Louisa B. Hart, Ellen Philips, and Simha C. Peixotto) devoted to the cause of religion and education. They founded the society in the belief that all Jewish children should receive basic religious instruction, regardless of financial standing or synagogue affiliation. The Hebrew Sunday School Society of Philadelphia (HSSS) was part of the increasingly strong network of cultural, spiritual, and social organizations built by and for Jews in the region.

She saw the young of her people growing up in ignorance of their faith, and she conceived the idea of a 'Sunday-school,' to be held in some room where the children would assemble to hear the word of God, to learn his commandments, and receive instruction in the religion of Israel. She, with other ladies, founded the institution, and for years she was its President and head.

In addition to her desire to strengthen the Jewish community from within, Gratz was also motivated by her conviction that American Jews would gain the respect of the larger Christian community by being observant and pious within their own religion. Gratz served as president of the organization until she was 80 years of age. 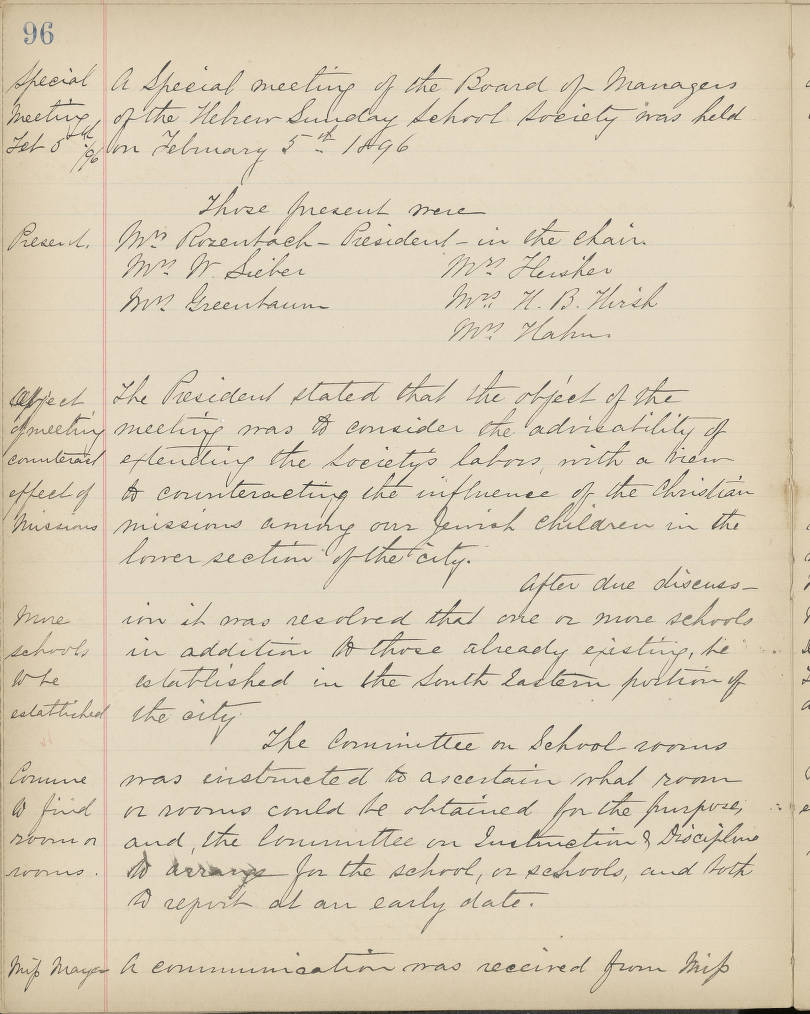 In the mid-1890s, the HSSS sought to strengthen the local Jewish community against the rising numbers of local Christian charities which were actively evangelizing while aiding the poor regardless of religious identity. At a special meeting of the HSSS Board of Managers on February 5, 1896, they discussed “extending the Society’s labors with a view to counteracting the influence of Christian missions among our Jewish children in the lower section of the city.” The board resolved to establish one or more schools as a means of recruiting new students, particularly those already attending Christian Sunday schools. 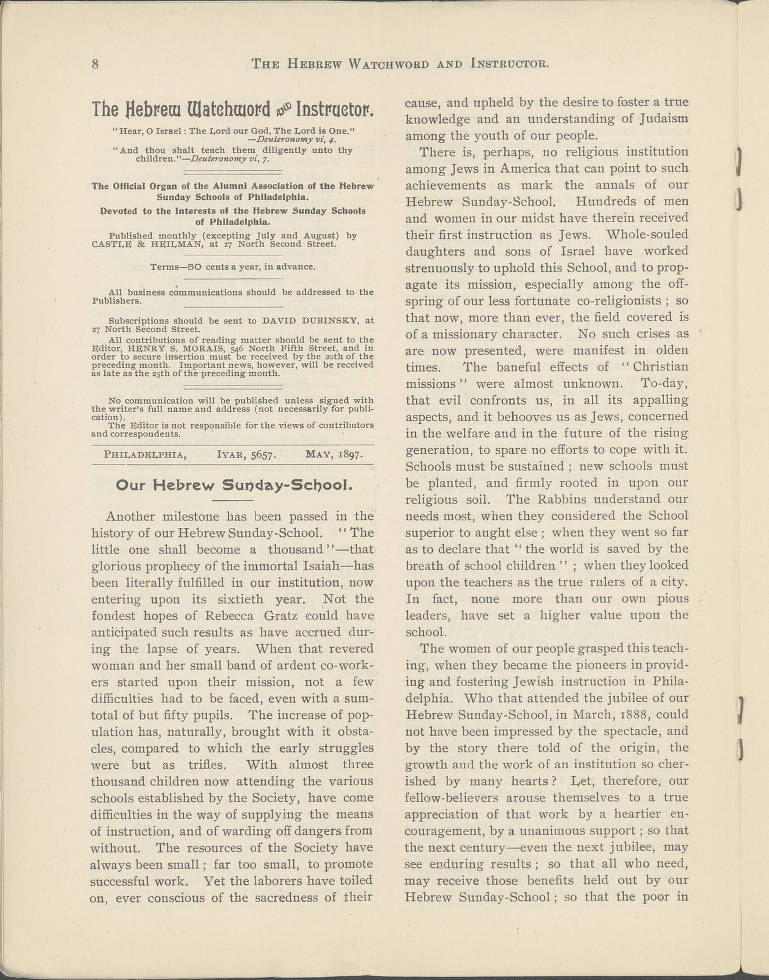 In the HSSS Alumni Association’s May 1897 issue of The Hebrew Watchword and Instructor, Christian evangelism in late-19th century Philadelphia is evident:

No such crises as are now presented, were manifest in olden times. The baneful effects of ‘Christian missions’ were almost unknown. To-day, that evil confronts us, in all its appalling aspects, and it behooves us as Jews, concerned in the welfare and in the future of the rising generation, to spare no efforts to cope with it. Schools must be sustained; new schools must be planted, and firmly rooted in upon our religious soil.

The women of HSSS established additional Sunday schools throughout the southern sections of Philadelphia; groups like the Young Girls’ Union (1896) “to prevent the spread of Christian ‘Missions,’ promote sociability, and health protection;” and religious services and instruction in other institutions like the House of Refuge at Glen Mills (1898) in an effort to battle conversionist efforts and strengthen Judaism among their co-religionists.

Enrollment in the Hebrew Sunday School continued to grow until 1927, when over 10,000 students participated in the program. As the number of synagogue-operated Sunday Schools increased, however, the number of HSSS students decreased, and the Society began to shift towards providing financial aid to support these other programs. It continued to provide other educational opportunities and programs, including instruction for gifted children and children with disabilities.

Ready to explore? Visit collections related to this exhibit in In Her Own Right: Hebrew Sunday School Society of Philadelphia (Pa.) Records.