During the 19th century, when rapid social change and experimentation swept through American society, WMCP (initially Female Medical College of Pennsylvania) opened in 1850 as the first degree-granting medical school for women in the world (yes, that’s right, the world!). Because of this “first,” WMCP often attracted national attention.

Two scrapbook volumes available on the In Her Own Right website contain clippings focused on two infamous Philadelphia events, events that brought national attention to WMCP and forced the public to consider women’s “place” in medicine yet again.

The first event occurred on November 6, 1869, when a group of 20-30 female WMCP students went to the Pennsylvania Hospital amphitheater to attend a clinical lecture, joining several hundred male medical students. Their attendance drew a strong response from the male students, including yells, cat-calls, epithets, mock applause, throwing of paper and tin foil, and even spitting tobacco onto the female students’ dresses. This event came to be known among students, faculty, and alumnae of WMCP as “The Jeering Episode.” 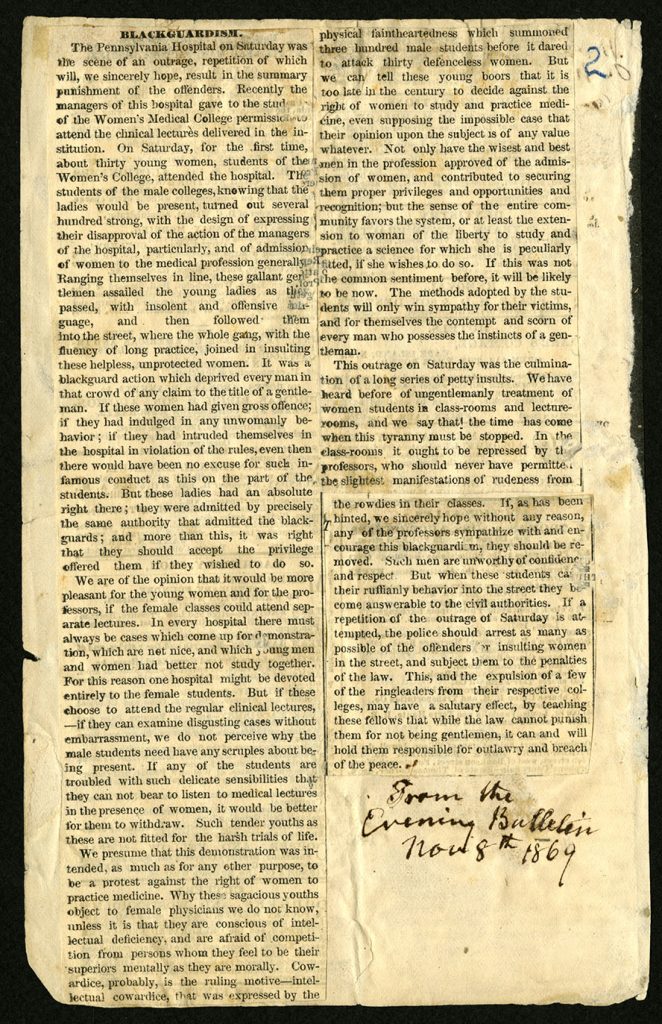 “…The students of the male colleges, knowing that the ladies would be present, turned out several hundred strong, with the design of expressing their disapproval of the action of the managers of the hospital, particularly, and of admission of women to the medical profession generally. Ranging themselves in line, these galland gentlemen assailed the young ladies as they passed, with insolent and offensive language, and then followed them into the street, where the whole gang, with the fluency of long practice, joined in insulting these helpless, unprotected women. It was a blackguard action which deprived every man in that crowd of any claim to the title of a gentleman.”

Widely covered in newspapers, “The Jeering Episode” and the ensuing debate about women medical students reflected public opinion at the time (for the women, against the women, or neutral), preserving all sides of the story through media reports. This incident would become a turning point for the College, its students, and the general public, shifting popular opinion to favor women becoming physicians and creating the environment for future generations of women to study medicine.

The second infamous event occurred on June 2, 1915. Dr. Richard Clarke Cabot, professor of medicine at Harvard University, gave the 66th WMCP commencement address. Instead of congratulating the 30 graduates on their success, Dr. Cabot “started out with the blunt assertion that the average woman is not fitted to become a successful general practitioner or laboratory worker, and then advised the thirty brand-new women physicians to avoid those branches of profession and devote their activities to social service. He said the competition and strenuous character of the work, not to mention the existing prejudice against female physicians, made most women “disappointed or dissatisfied” after they began to practice. 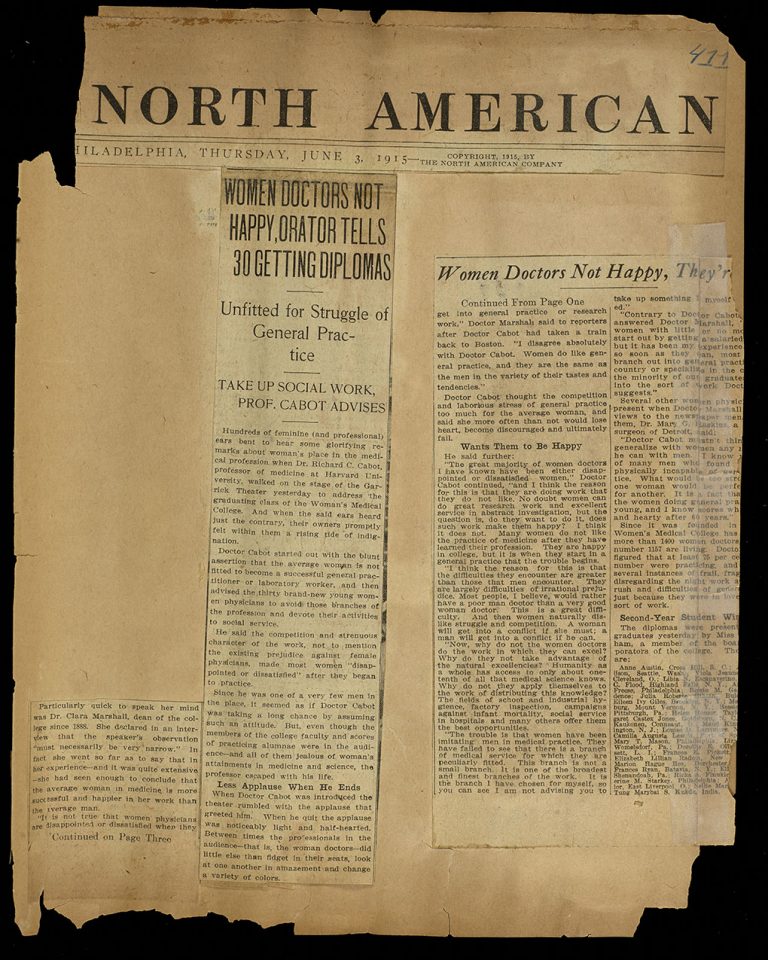 Cabot’s commencement speech outraged WMCP faculty, students, and medical professions across the country. At this point (75 years after the founding of WMCP), there were many women physicians practicing medicine in the U.S. and abroad who took offense to Cabot’s assertion that women physicians are “disappointed.” Like the 1869 “Jeering Episode,” there is a great record of the outcry over his speech, as reflected by the press reports and editorials in the scrapbook.

Both events stirred the “hornets’ nest”, highlighting the opinions of medical professionals, as well as those in favor of and opposed to women in medicine (and those neutral to the idea) through the press. These two sensational events ran in Pennsylvania newspapers and in papers across the nation, including New York, Massachusetts, Washington, D.C., and Illinois.

These incidents emphasized the struggles of women in medicine and their determination for equal education and employment despite the popular beliefs that: (1) it was improper for women to study medical subjects and anatomy alongside men, (2) women physicians should treat women and children only, and (3) women physicians are better suited for social medicine, not scientific or practical. 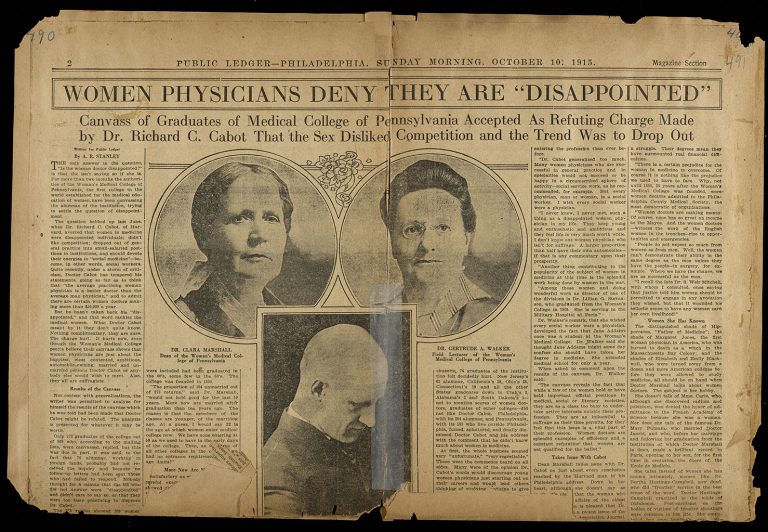 While the expression “there is no such thing as bad publicity” is personified within these scrapbooks, Dr. Gertrude Walker’s words speak to how these controversial events can create a positive outcome:

“Dr. Cabot’s speech aroused considerable resentment at first. Later came a calmer consideration of his views. The amount of refutation of his conclusion that women physicians were disappointed that appeared in the press aroused curiosity. As a result, more women are entering the profession than ever before.”

Ready to explore? Visit collections related to this exhibit in In Her Own Right: Woman's Medical College of Pennsylvania clipping scrapbooks, 1869-1923--ACC-133