The history of the United States, in many ways, is the story of a perpetual struggle between inclusion and exclusion. Women and African Americans are two groups that have often found themselves excluded from America’s promises, from their absence in the Declaration of Independence to continuing legacies of disadvantage well into the 21st century.

Since its origins in the mid 17th century, the Religious Society of Friends (Quakers) has offered women both spiritual and administrative authority within their religious community. This accustomed Quaker women to assert themselves and their values in public culture at a time when many women of other faiths were often discouraged from doing so. This trend is exemplified in the mid-nineteenth century, when Quaker women were driving forces behind not just the burgeoning women’s rights movement, but also abolitionism and philanthropic support of formerly enslaved people, in line with a long history of Quaker opposition to slavery.

This primary source set explores the influence of Quaker women in the movements for African American freedom and rights, as well as intersections between that activism and women’s rights work, through a focus on the stories of three strong activist figures: Lucretia Mott, Graceanna Lewis, and Martha Schofield.

This primary source set illustrates the complexities of activism and interconnectedness of struggles for racial and gender equality. Its focus on the impacts of Pennsylvania women engages a local focus, encouraging Pennsylvania students to look for real world connections to their local communities.

This set can be tailored for grades 9-12.

8.1.U.A. Evaluate patterns of continuity and change over time, applying context of events.

8.1.9.B. Compare the interpretation of historical events and sources, considering the use of fact versus opinion, multiple perspectives, and cause and effect relationships.

8.2.9.B. Compare the impact of historical documents, artifacts, and places in Pennsylvania which are critical to U.S. history.

8.2.9.C. Compare and contrast how continuity and change in Pennsylvania are interrelated throughout U.S. history. Belief systems and religions.

8.2.U.D. Evaluate how conflict and cooperation among groups and organizations in Pennsylvania have influenced the growth and development of the U.S. Ethnicity and race, working conditions, and military conflict.

8.3.9.A. Compare the role groups and individuals played in the social, political, cultural, and economic development of the U.S.

8.3.C.A. Compare and contrast the politics of various interest groups and evaluate their impact on foreign policy. (Reference Civics and Government Standard 5.4.12.E.) 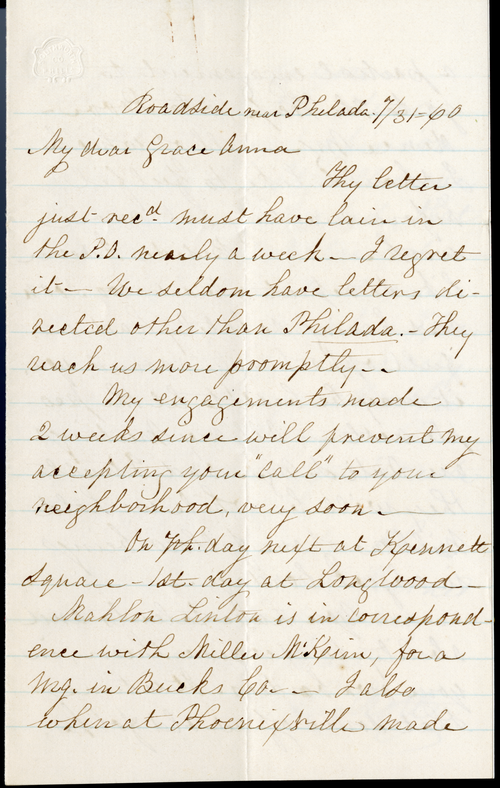 Lucretia Mott was a prominent Philadelphia Quaker and a leader in reform movements, especially antislavery, education, peace, and women's rights. In this letter, Mott tells Graceanna Lewis, a Quaker abolitionist and ornithologist, about antislavery meetings she has committed to attend.

“All of my meetings are antislavery meetings, and I trust they will be while we hold millions of our fellow beings in abject bondage” (p. 2). 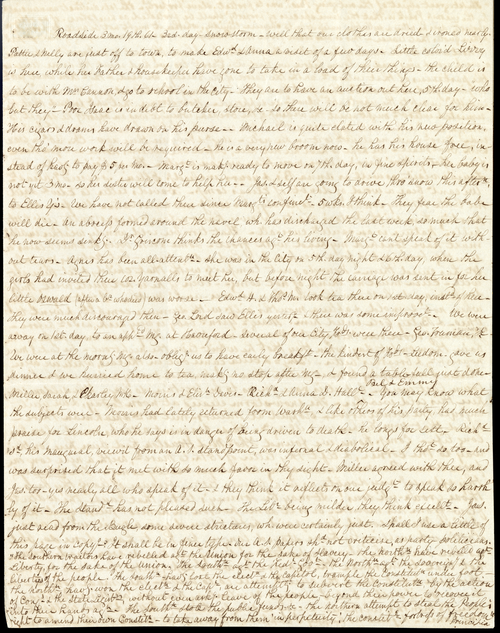 Lucretia Mott was a prominent Philadelphia Quaker and a leader in reform movements, especially antislavery, education, peace, and women's rights. In this letter, Mott talks briefly about secession, quotes and discusses a relative's remarks in favor of compensated emancipation, gives her opinions of Abraham Lincoln's inaugural address from an antislavery perspective, and quotes some comments on it from "The Bugle" and the "Principia."

"When Lincoln and Seward and very many of the Republicans promise, or express a willingness, to strengthen the pro-Slavery parts of the Constitution and to yield the claim to rob and murder by thousands--an infinitely greater number, than in any probably war, might be slain--then 'the sacrifice of a few lives,' in resisting such iniquitous provisions, may be a question" (p. 2). 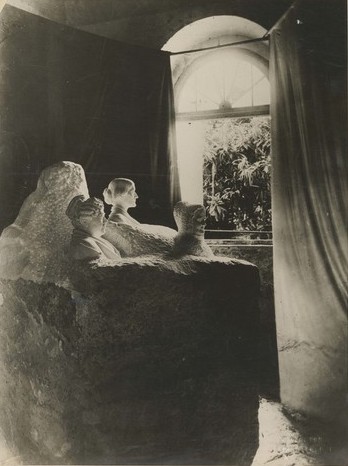 The Portrait Monument was created by American sculptor Adelaide Johnson on behalf of the National Woman's Party who presented it to the United States government after the ratification of the Nineteenth Amendment. The monument features busts of three prominent suffragists: Elizabeth Cady Stanton, Susan B. Anthony and Lucretia Mott. This photograph is one of a series amassed by Caroline Katzenstein for her book, 'Lifting the Curtain,' which surveys the development of the woman's suffrage movement in the United States. 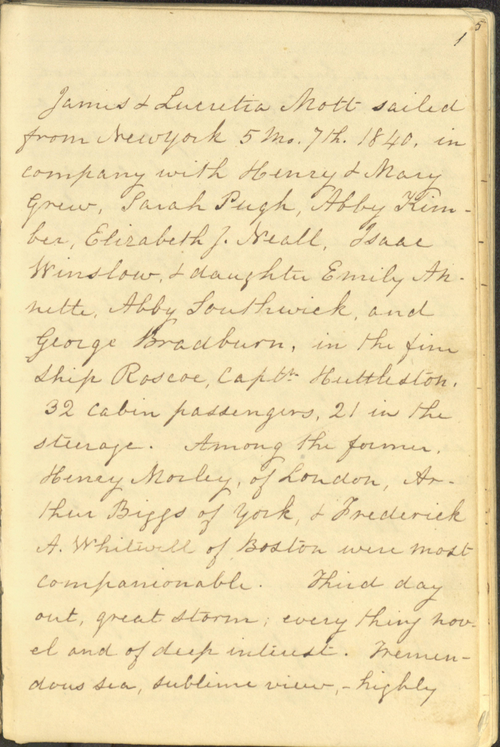 Memoranda during a Passage to & from England and Three Months Travel in Great Britain and Ireland, 1840, item ID: A00179435. Mott Manuscripts, SFHL-MSS-035. Friends Historical Library of Swarthmore College.

4. Lucretia Mott journal of travel to the 1840 World Anti-Slavery Convention in London

Lucretia Mott was a prominent Philadelphia Quaker and a leader in reform movements, especially antislavery, education, peace, and women's rights. She was one of the founders of the Philadelphia Female Anti-Slavery Society and led a delegation of women to the 1840 World Anti-Slavery Convention held in London. Mott kept this diary of her experiences when she and the other female delegates were refused partipation because of their gender.

"Prescod of Jamaica (colored) thought it would lower the dignity of the Convention and bring ridicule on the whole thing if ladies were admitted--he was told that similar reasons were urged in Pennsylvania for the exclusion of colored people from our meetings--but had we yielded on such flimsy arguments, we might as well have abandoned our enterprise" (p. 32). 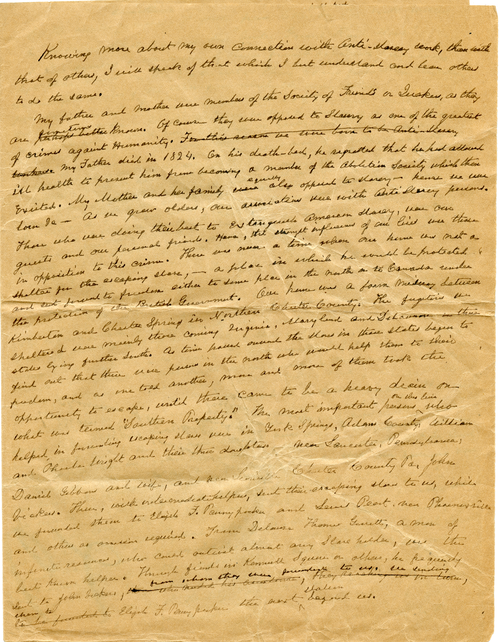 Graceanna Lewis was a prominent Quaker natural scientist and social reformer. In this memoir, Lewis recalls her experience working in the Underground Railroad and talks about different Quaker abolitionists in Pennsylvania.

“There was never a time when our home was not a shelter for the escaping slave, - a place in which he would be protected and sent forward to freedom either to some place in the north or to Canada under the protection of the British Government” (p. 1). 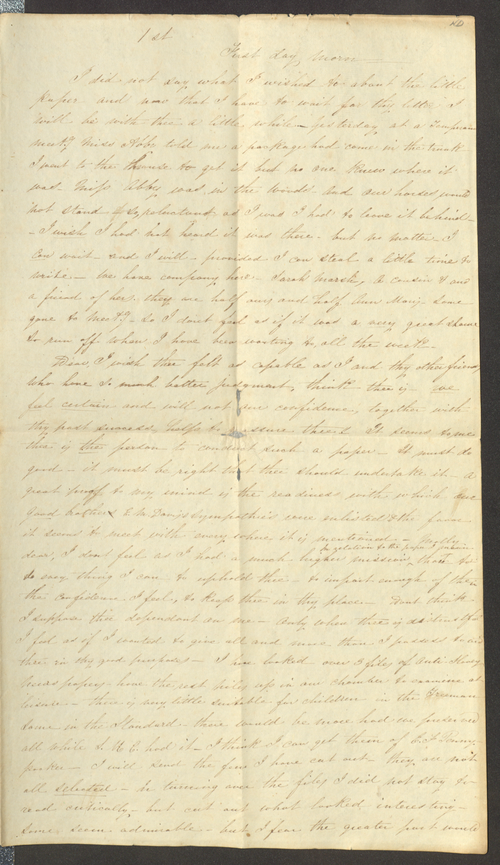 Graceanna Lewis was a prominent Quaker natural scientist and social reformer. In this letter, Lewis discusses an antislavery paper that she and her close friend Mary Townsend intend to start. Lewis is interested in asking Frederick Douglass to write articles about "prejudice against color."

“The other day, an idea crossed me that it would be well to get Frederick Douglass to write some articles on prejudice against color. The iron had entered his soul and his little children had felt its power; none could better portray it” (p. 2). 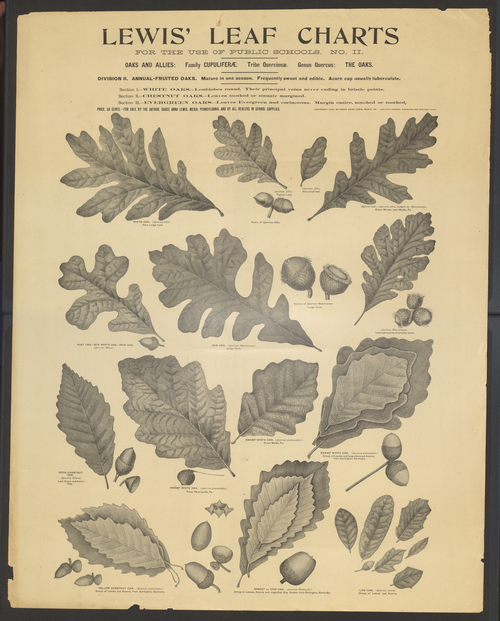 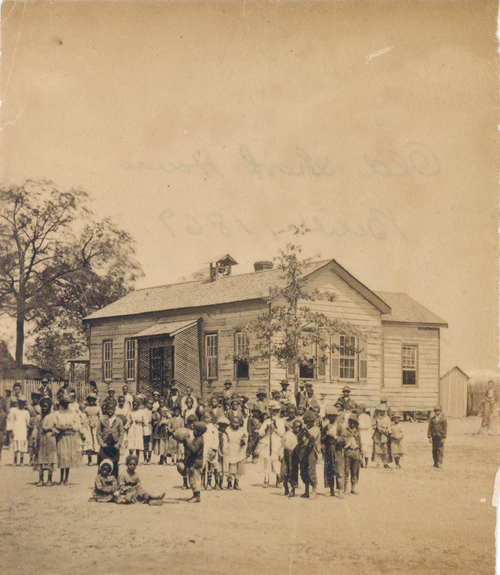 Photograph of the old Schofield School house with students standing outside. Back of photo says "Old School House Built, 1869-70." The Schofield Normal and Industrial School was founded in 1868 by Martha Schofield, a Pennsylvania Quaker. The goal was to provide an education for formerly enslaved people. The School gradually evolved into a boarding school for training young Black people in industrial trades or to become teachers. 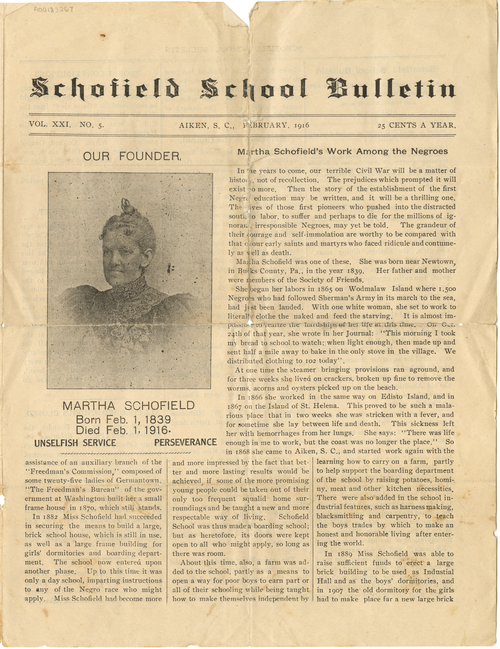 The Schofield School Bulletin was a monthly periodical published by the teachers and students of the Schofield Normal and Industrial School. This issue focuses on Martha Schofield, the founder of the school, who died on 1916-02-01. Includes eulogies by Schofield's friends and former students.

"I was very much shocked to learn of the death of Miss Schofield, the founder of Schofield Seminary, that has done so very much for my race . . . . Truly she was a very, very great woman, having given her entire life to the development of the school for the purpose of educating young men and young women of my race. To my mind, Miss Schofield is one of the greatest women of her day and of her generation, and we could ill afford to lose such a splendid character whose entire life was spent in the uplift of the Negro” (p. 3).

This teaching guide helps instructors use a specific primary source set in the classroom. It offers discussion questions, classroom activities, and primary source analysis tools. It is intended to spark pedagogical creativity by giving a sample approach to the material. Please feel free to share, reuse, and adapt the resources in this guide for your teaching purposes.

Larocco, C. The Complexity of Activism. In Her Own Right, A Century of Women’s Activism, 1820-1920. http://inherownright.org/spotlight/introducing-women-s-activism/feature/the-complexity-of-activism